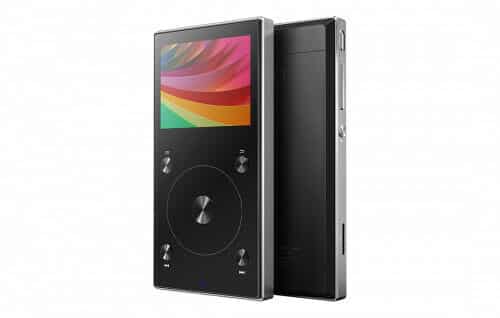 Fiio X3 mk-III is a quite old-fashioned although solid performer.

Warm-ish (which is not a defect per se), not pitch-black noise wise (which instead is a defect), but can’t be honestly called bad at all.

Yet, one of its hard features suddenly started hitting me badly in the recent past, that being its quite limited output power. X3 only is capable of 110mW against a 16Ω load on the balanced port – which is oddly slightly less powerful than its single-ended option at 120mW against the same load – and what’s worse its performances don’t decrease but just drop quite dramatically if the load is below 16Ω. Which quickly grew significant to my case since I bought both E-series TOTL models by final: E4000 and E5000. X3 proves barely adequate to drive E4000, featuring 15Ω impedance and 97dB sensitivity load to the source, but when my E5000 (14Ω / 93dB) came in… well… I could see a little white surrender flag coming up the screen 🙂

X3 just couldn’t cope. So I initiated an upgrade path made of Hiby R2, Tempotec V1 and dongle(s) satisfactions, and disappointment on Fiio BTR5, until a further step I recently too which I will tell about in an upcoming post.

X3 mk-III has nonetheless been my first DAP so I have a sort of irrational affection to it. That’s why I thought to dedicate just one last post to it, summarising my experience and my positive and negative opinions about it.

As always I won’t go into details most other “reviewers” cover. There’s no need. You may just want to check a few pre-existing reviews like those I listed here at the bottom.

Sound presentation is “good”, simple as that. General totality is warm, good for bright-ish IEMs, terrible for dark ones (unless someone really really adores dark sound)

The GUI, although entirely button-driven (no touch screen here) is more than decently engineered, very fluid and solid. An old-style pleasure to use.

Battery autonomy is decent: over 8h playtime on single ended port. Less than 6 on balanced though.

Line Out and SPDIF options as menu-selectable alternatives to Heaphone Out regarding the 3.5mm single ended port offer very nice flexibility if I want to use it as a transport connected to a desktop amp, or a sound bar for instance.

A basic but decent 10-fixed-bands Graphical Equaliser is included. It comes with +6/-6dB max allowed correction, 1 Custom profile and 8 Preset profiles which are nevertheless all user-modifyable like the Custom one.

Those longing for an imperceptible noise floor should look elsewhere

Only 1 SDC slot, and supporting 256GB max cards. This is a bit subjective. Certainly, if I settled for MP3 quality that would be very nice capacity. Sadly, my collection only includes minimum 16bit / 44.1KHz FLACs (and quite a few 24bit / 192KHz ones too) so 256GB is definitely “tight” for me, especially considering the other issue just below

Paaaaaainfully slow indexing new SDCs. Like: 10 full minutes to take in just 3-4000 songs. Very, very annoying. Especially form me wanting to carry over a collection much larger than 256GB: swapping cards is a pain in the b-side.

Balanced ended output power not higher than single ended output. Quite meagre especially considering that neither option goes beyond 120mW @ 16Ohm, which is not great at all to drive unsensible loads.

No support for USB audio out! So no possibility to daisy-chain an external DAC / DAC-dongle aiming at “upgrading” the internal one. X3 mk-III can’t be recycled as a transport. What a pity.

Bluetooth (4.1) implementation is pure crap. Unstable, buggy as hell. Not a biggie for me (I never use BT anyway) but worth noting anyway.

Only BT-out (e.g. to connect X3 mk-III to TWS drivers) is supported, but no BT-in : so it’s not possible to target X3 mk-III as a BT DAC-AMP.

The EQ could be much better, too

There is no pre-amping slider as the system imposes a punishing, fixed -6dB attenuation whenever the EQ is enabled.

On each slider only 1 full dB (no decimals!) increments can be set

EQ does not work on BT connections.

Most of all: the EQ is only working on source files up to 16bit / 48KHz resolution. Files with higher resolutions are totally transparent to the EQ. To stay true to their consolidated habit of not disclaiming bugs or structural limitations to their potential customers prior to purchase, no mention to this situation exists on Fiio’s product pages on their website, while this is confirmed by Fiio support people on their support forums.

Fiio X3 mk-III although discountinued by Fiio can still be purchased new from channel distributors by the like of €160 or more, which is a totally unreasonable price give its aging and multiple limitations and bugs.

Found second-hand at no more than €50 might instead represent a nice option as an entry level, or a backup unit.