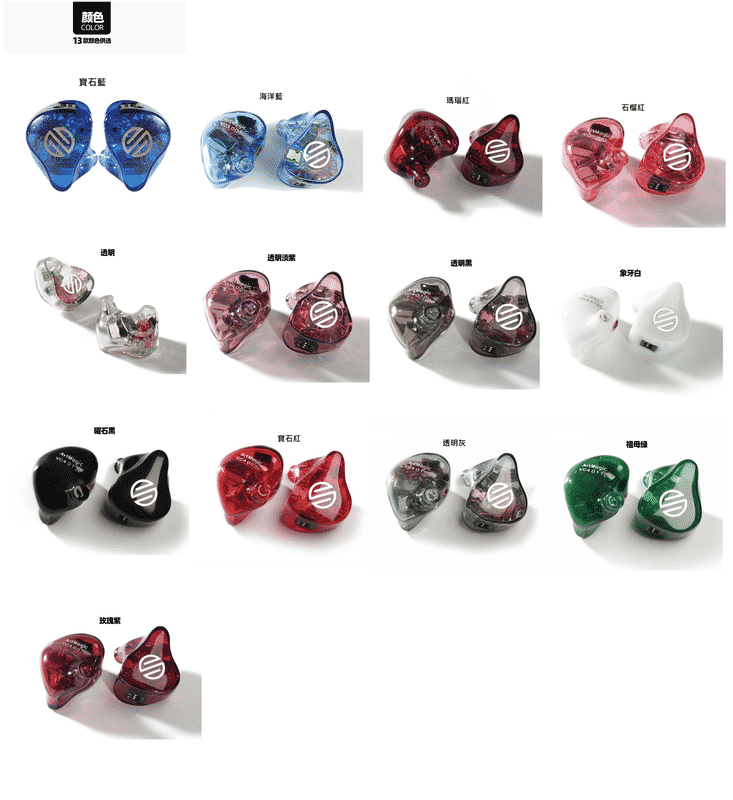 This story starts on the tones of a horror novel. Right after unboxing, as per usual default I plug them to my R5. After 10 minutes I was about to trash them. They just sounded horrible. As in: I don’t remember last time I heard such an unhearable crap.

Bass was totally hollow. Not only “unbodied” as you might somehow expect by bad-tuned BA, but really lacking entirely. Almost as if the tips were not getting the seal. But they were.

Treble was live, sparkly and full of details – but way too much. It was also sibilant but most of all screachy, peaky, simply definitely unpleasant.

VG4 comes with 3 sets of tips (S/M/L each). Pre-installed are the black ones, soft silicon wide bore – these are what I initially used.

Blue stock ones (supposedly “for vocals”) are a pure joke: their stem is too large, and does not grip properly on the nozzles. When I tried them on they slid off the housings and I had to remove them from my canals with a pair of tweezers 🙁

White ones are stiffer and therefore recommended “for bass”. Which is kinda true, they enhance bass a bit (due to a firmer seal, as normal) but they also make sibilance even worse for me.

So much for stock tips. On with rolling. I tried: Spinfit, SpiralDot, SednaEarfit Light, SednaEarfit, Radius DeepMount, Symbio Peel, Final E, Acoustune ET07. The sole ones taming sibilance (for my ears) are SpiralDots. OK, on with them.

Sibilance is solved by the tips. SpiralDots are relatively stiff so bass gets a bit more bodied, but nothing remotely enough to call them decent. All the rest remains pure crap.

Is it maybe a never-so-severe-before pairing issue ??

X3-III is the warmest of all those sources, and in facts it tames trebles “a bit”. The situation remains crappy but why not trying to play with that a bit. So I keep X3-III in the game, lower volume to zero and start progressively raising to hear what happens.

I keep going up. At 28/120: boom! Bass “turns on”. Instantly. Trebles get even shittier in the meanwhile.

And, almost immediately afterwards (31/120) basses go into evident distortion. In the meanwhile, trebles shout and peak-out like crazy.

One step back: at 30/120 mid and sub-bass “sound about right”… almost always. “Sometimes” they suddenly turn off, then on again, and so on. At 31/120 they stay on, but almost always distorting.

VG4 have a declared avg impedance of 12 Ω. That’s the problem.

Technically, it’s not a problem with or about VG4 to be honest. Fact is that all of my sources have a minimum recommended load impedance of 16 Ω. So by pairing with VG4 it’s me asking them to do something “out” of their scope. Can’t blame them.

It would be equally honest to note that the overwhelming majority of portable budget source, and most of mid-tier ones do support 16 Ω ++ loads, not lower. This leads into wondering how brilliant is BGVP’s commercial choice about designing an IEM requiring special sources to drive. More on this later. Let’s go back to the technical part.

Barred exceptionally lucky cases, the pair of VG4 with my owned sources technically simply “could not” work. I’ve not been lucky, and in facts it didnt work.

Not going to write a treaty here but it’s worth to remember that low impedance IEMs sound louder or quiter, and “better” or “worse”, depending on how much “current” flows through them.

Portable sources have a much easier time providing good voltage swing into moderate impedance headphones, while it is much more difficult to design portable devices providing a high and accurately-managed current flow into low impedance IEMs. And, the lower the impedance, the exponentially harder the task.

That’s why most budget- and even mid-tier portable audio devices are officially specced for impedance loads 16 Ω up.

So to find out how these VG4 really sound I have two options: find (borrow, buy…) a 12Ω-load-certified source and/or “fix” the situation externally.

The latter option seemed to me the golden opportunity to justify trying an item I’ve been watching for a while, but I never had the occasion (or the excuse…) to put to work: Ifi-Audio IEMatch.

IEMatch is presented as a one of a kind device.

It’s supposed to stay in the middle of the analog path, between the Amp and the IEM, much like a plug-size-adjusting adapter. It contains passive circuitry that, according to its specs:

The declared main design purpose for IEMatch is to clean-off the hiss affecting ultra sensitive IEMs. In my case the idea is using IEMatch as a “high class impedance adapter”.

Once VG4s are connected to IEMatch, and that is connected that to my R5, the R5 will “sense” a 16 Ω load instead of a 12 Ω one, which will make its output circuitry behave within its designed range. On the opposite end, VG4 might potentially not “like” IEMatch’s High Setting too much as IEMs/HPs “sound best” when connected to output impedances not greater than 1/8th of their internal one. So I expect to get best results (if all goes well, and Ifi Audio’s specs are true to their product) on Ultra setting.

Which means I need to be prepared to cope with a -24dB attenuation. That’s a lot, and I do mean a lot. This is why for my test I got a IEMatch 2.5 (balanced ended) version: to exploit R5’s balanced output power reaching up to 1040mW into 16 Ω at fullscale.

What’s most important is that VG4 via IEMatch has a wonderful sound. And I really mean it.

Here below I’ll put my usual table-style analysis but I found VG4’s overall sound so good that I deem worth adding a more discursive description.

While this article is centered on VG4 lets first complete the brief about IEMatch behaviour in this case. Exactly as theoretically expected :

Now finally on to VG4’s sound.

With all 2 switches on 0 position (more on this later) the general tonality is exceptionally clear-neutral. All sections (bass mid and treble) feature very fast transients, as on the other hand one would expect from BA drivers. Same general league as TIN P1, which is even faster though.

Unlike P1, VG4 bass curve is ruler flat, no rolloff in the subs. Beyond that, it sounds much fuller than P1, punchier, more engaging, still absolutely bleed-free. A very centered compromise between precision and body.

Mids are slightly recessed, quite defined and reasonably pleasant. Male vocals definitely better than Female, both, together with other instruments like guitars, benefit from SW2 (see below) the end result being good Males, just decent Females. In terms of quality, we are not in the same league as P1 here, not even close actually.

However good the lows are, the highs are even better. Again, I can hear a speed similar to P1 but with a world more of dynamics and rhythm. As much as P1 is crisp though liquid and relaxing, VG4 treble is full, sparkly, defined and entertaining. Details are eons ahead of P1, in the league of Shuoer Tape to make another comparison, but without a screech, zing or shouty peak, and most of all no hint of that somewhat “metallic” halo which I often find associated to highly-detailed treble presentations. Trebles are at the same time greatly detailed, full, and musical.

Now that VG4 is properly amped, sibilance also goes away and I can safely fallback into adopting stock black (wide bore) tips.

In addition to lows and trebles, the other VG4 fortes are no doubt its key technicalities: soundstage, imaging and instrument separation.

Stage is very wide and deep, not only much more than the aforementioned P1 (which indeed has a weak point there) but surpassing all other IEMs I heard in this price bracket and the one above. Instrument separation and imaging seem cut & carved with a laser tool: all sounds are crystal clear, perfectly separated and positioned onto a “well-lit” stage, where I kinda “see” each one on its own. A really, really well done job.

Each VG4 housing integrates a dip-switch block with 3 switches, aimed at offering some easily and instantly user-selectable tuning variations, one per spectrum section.

To “illustrate” my subjective hearing I’ll aid myself with measurements published by Jaakko Pasanen.

SW1 adds a moderate hump (a “bell” in EQ jargon) at around 6K, and rolls high trebles off a bit sooner. Far from causing sibilance, the trick is actually very beneficial ! The overall treble presentation gets even more vivid and “complete” on most songs I tested it with. I like that.
As it is inherent with the dip-switch system, the added value also stays in its optionality, and easy, instant applicability.

SW2’s measured FR curve differs from SW1’s by less than 1 Ohm all over the range, so it should be audibly identical. I suspect a wrong measurement is plotted here as the effect of the switch is quite evident instead.

Mids (both voices and instruments, primarily guitars) get an obvious, not excessive “embodiment”. The result is a more intimate general feeling, which is particularly beneficial for acoustic / vocal bands of course, less important or even unwelcome in other cases.

In this case the graph presents itself again consistent with my direct experience: SW3 enhances the low (logarithmical) half of the spectrum, that is low mids, midbass and subbass by some very audible amount, while taming highmids and trebles by a smaller amount.

I do feel VG4 can benefit from an energic bump in sub-bass, especially in conjunction with some musical genres, but I would apply “just that”, not all the rest which is “moved” by SW3. Trebles don’t need taming. Mid bass don’t need raising. To my taste, of course.

My “custom SW3” is an EQ scheme much similar to the one I apply to TIN P1, as follows:

As I mentioned P1 once again, it’s worth noting here that VG4 bass is way more bodied right off the bat compared to P1, so this boost is in my taste “more-optional” than in P1 case, so-to-say.

If you read my other review articles you know I just can’t be fussed by packaging, accessories, aesthetics etc. I encourage you to read the other available reviews for this, linked here at the bottom, which are much more “dressed up” than mine, as always.

Ergonomics are fine. Housings are on the big side, but not very heavy. Luckily their shape fits my concha very comfortably resulting in allowing me hours of fatigue-less usage. Being this an extremely subjective point, YMMV by a long shot of course.

A particular mention is worth for the cable which, for my limited experience, is of uncommonly good quality in the “chifi stock cables” category (more on this in the data tables below). Given the story above, I needed to swap it with a balanced cable – but that’s a real pity.

In its neutral-signature category, great sound quality is there and there’s some to spare too, no question about that. Simply put: sound is very nice, and technicalities near-superb.

So what could ever play against?

Well first of all the price tag is not so low in absolute terms: $274 MSRP, $224 typical street price. But that may be considered worth it, indeed.

The point is, unless you are a lucky (or provident!) owner of a DAP / AMP nimbly supporting 12 Ω quite sensitive drivers, high chances are you have to complement VG4’s cost with $60-ish for an IEMatch, and this assuming your source is able to deliver at the very least 900mW vs a 16 Ω load to cope with IEMatch Ultra setting – otherwise you need to further invest in an adequate AMP of course. So, again simply put, in the most adverse – but I’m afraid very frequent – case, VG4’s TCO (Total Cost of Ownership) easily climbs to $500 or more. And no I don’t think VG4’s sound is worth such an expense.