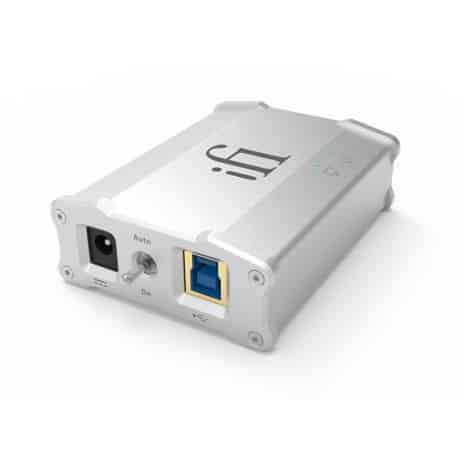 Simply put ifi iUSB3.0 is an active (i.e.: autonomously powered) device which makes communication much better between a digital music player (e.g. a laptop, a multimedia server, etc) and a USB-connected and possibly USB-powered DAC or DAC-AMP.

iUSB3.0 forwards the clean(er) power coming from its own power supply to the downstream DAC / DAC-AMP, which will stop receiving the “dirti(er)” power coming from the host’s non-audio-grade PS, furtherly dirtied by host’s internal circuitery and activities.

It can potentially be furtherly upgraded adopting ifi’s own iPowerX (an even more sophisticated and cleaner SMPS) or any suitable third party SMPS a Linear PS if need be. Mind you: a Linear PS may cost a few times the price of your DAC 🙂

iUSB3.0 kills any earth/ground loops between the DAC and the host.

This is less trivial than it seems, as applying the trivial electrical solution (“cutting the upstream GND wire”) would not be USB-compliant and would make many downstream devices not work properly / at all.

3 – Actively cancels (a lot of) noise

iUSB3.0 features “Active Noise Cancellation”. The concept is quite similar to that applied on Balanced analog lines: a second signal is generated identical to that of the incoming electrical noise, but in the opposite phase; the two signals are then “summed” together, which cancels the noise leaving the “good” part intact.

According to better engineers than myself this approach is significantly better than the cheaper “passive filtering” alternative: passive filters remove hi freq interference only, active filtering act on lower frequencies too.  According to ifi, this technology only inside iUSB reduces the noise floor by > 40dB (> 100x).

iUSB3.0 re-clocks, re-generates and re-balances the USB data signal. What does that mean?

So much for the technology. But does it work?

I put nano iUSB 3.0 up in between my laptop and my USB-powered dongles (Meizu HIFI DAC Pro and Apogee Groove). I don’t have that many other choices but the interesting part is that I’m comparing a pro-class product with a budget device (although very competent in its category).

The improvement when listening to Meizu HDP is nothing less than huge.

The difference is very apparent on Apogee Groove too, while the delta is smaller as expected: Groove already incorporates high-end (for its class and size) power cleaning technology, so iUSB3.0 impact is “mainly” about USB data stream “fixing”.

The overall sound is evidently clearer. The difference is totally apparent on Meizu, less so on Groove, but still there. Low tones are where the effect is more perceivable (ofc): back instruments and vocals suddenly gain better readability.

On the extreme, listening via Meizu to a well mastered song with “silent moments” on one channel I would normally say such silence is “quite silent”. Then I connect iUSB3.0… and I find out that such supposed “silence” did in fact have “some SPL”, litreally as in “pressure felt on the timpanus”, which is now gone.

Via Groove sans iUSB3.0 the same “silent moments” are nearly on par with those reproduced by Meizu+iUSB3.0, while stacking iUSB3.0 I perceive further de-pressure, and some very faint sounds (e.g. a player moving) get audible, or more audible, which were covered before.

Powering Groove via iUSB3.0 generates a whiff more of SPL accross all frequencies, whilst perceivably reducing the high/low tones gap. In more vulgar words this means that without iUSB3.0 a song lead vocals and instruments are presented by Groove at (say) SPL=10, and back guitars at SPL=5, while by adding iUSB3.0 I will have front lines at 10.5 and back lines at 6. Everything is a little bit louder, but low tones gain more than high ones. This of course grants further clarity and detail to back-line voices.

The effect on bass frequencies is better control and texture. Again, on Meizu the difference is huge. On the Groove, which is already making masterful bass control a main cipher of its art, this equates into further bass texture – of which I’ll always be thirsty anyway.

On trebles significant more crystallinity is offered. On some tracks, and on bright-leaning drivers this is even more apparent and may lapse into an unforgiving output (the IEM tuner’s art will show here… if some has been applied, that is…).

Soundstage: improves not much in term of size rather in terms spatiality: E3000 being already a blessed IEM on that respect, it now allows me to better guess the room size / shape. Sound is more “coherently around me”.

Imaging: not only instrument positioning is furtherly palatable in a “more clearly lit” stage, as it sounds logical, but – less expectedly at least by me – some instruments also appear better reciprocally spaced.

Ah well, it depends – in less then a thousand words – from the current status of your stack.

I have zero practical experience with high end systems, so “by logic” (yet not by experience) I would tend to believe that you will need it less (if at all) if

My reference DAC being Apogee Groove, I check the first one only of these latter two bullets big time: Groove takes power from my Laptop’s “dirty” line. A “cleaning” there is certainly welcome.

At the same time, as mentioned above Groove already incorporates quite a lot of input data noise control, which makes the second bullet point a lesser priority at least.

In terms of minmaxing my best option would have probably been fixing the PS part only (e.g. by means of ifi iDefender3.0 + ifi iPower). After that, I could have always added an iPurifier3 to add USB data line “purification” at a later stage.

The reason why I got a nano iUSB3.0 (incorporating the features of iDefender3 + iPower + iPurifier3 + some minor other stuff) has just one reason: luck.

The nano package having recently been discountinued by ifi in favour of the dual-sized (and dual-priced!) micro iUSB3.0, this triggered a stock clearance sale from my local disty whereby I could harpoon a nano iUSB3.0 for less than the regular price of an iDefender + iPower…