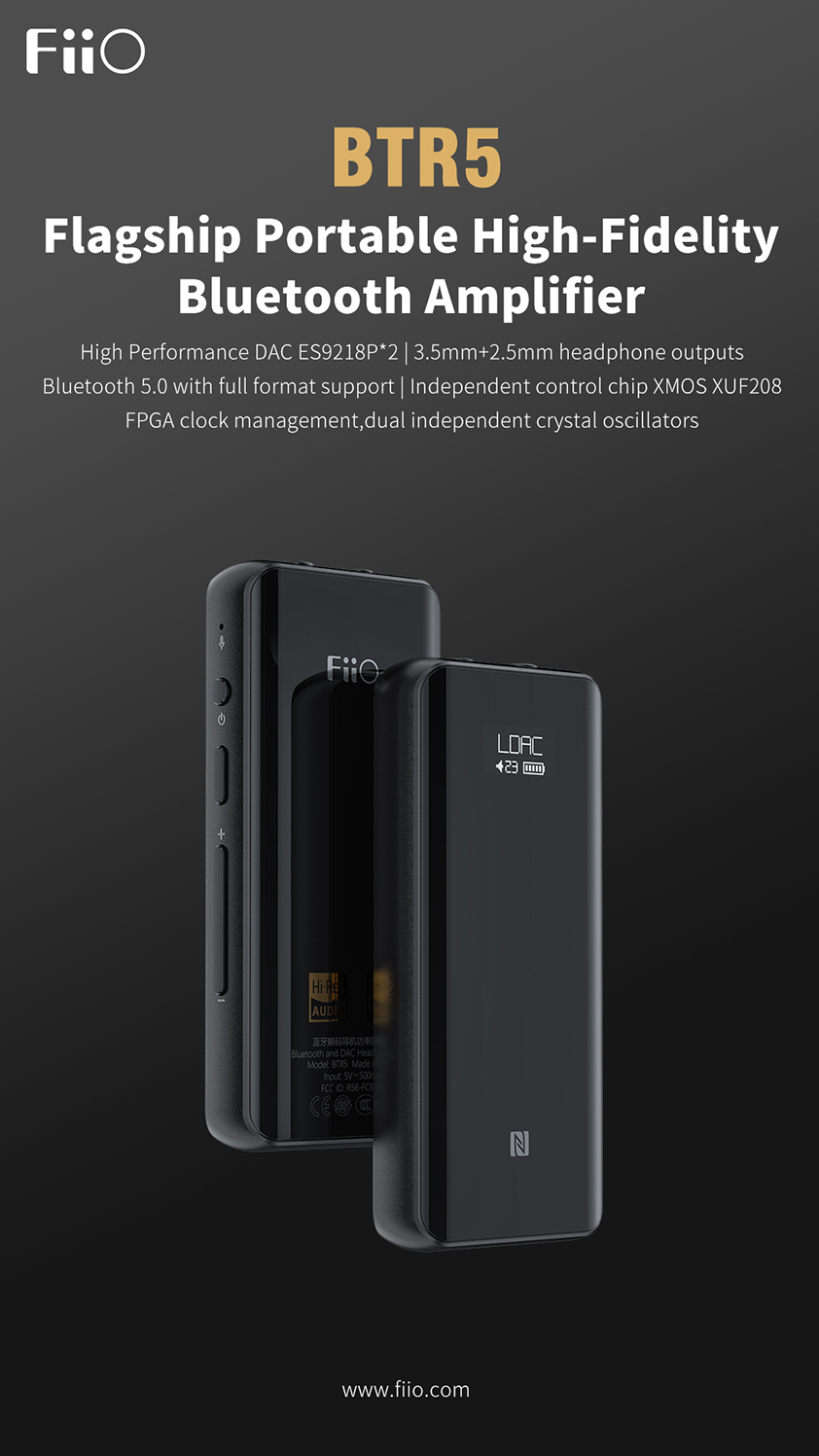 I 100% confirm what the reviewers claim about BTR5 sound quality when used as a USB DAC, and on its balanced output port.

I can’t commence to tell how beautiful and energetic is its sound even when driving the most demanding of my IEMs, namely final’s E5000. It’s just great. I mean it.

Although with some second-level differences, SQ-wise BTR5/USB/Balanced is arguably way better than Hiby’s R3 and on par with Hiby R3 Pro, and it even does not stand too much behind R3P’s bigger brother, the R5, costing almost 3 times more.

But that’s pretty much the end of my satisfaction about this purchase on which I had placed many – maybe too many – expectations and that failed to deliver both on the product and on the manufacturer’s value level.

I’m pasting my notes here below. I presume this is going to sound like a long unpleasant rant in the end. You might not want to read that, just leave now. In facts, it’s all summarised as:

TD;DR : I like BTR5 in terms of sound, but I it just sucks in terms of value. And I will most probably never buy another Fiio product either.

BTR5 was supposed to serve me as a super-portable (i.e. small, lightweight) battery-powered USB DAC.

I am in facts not interested to BT. Not yet, not now at least.

Streaming audio via BT, even with the highest quality codecs available today, does impact on sound quality, especially when considering uncompressed hires files of well mastered tracks, compared to the traditional full-wired path of course.

Many would have solid grounds to argue back on my statements, if nothing else in terms of perceivability of the degradation: most of the drivers we all use offer at best imperfect and at worst crappy passive noise isolation. Am I really saying I can hear the difference between BT and USB audio while on a bus, a train let alone an aircraft? Of course I’m not.

But see, the fact is: I don’t listen to music while commuting (I actually very rarely commute). Indeed I primarily listen in a very quiet environment, at home, and each time for a damn much shorter time than I’d actually like. And yes, in such quiet situation I do hear a difference. Add that in the home environment liberty from cables can be made into a lesser priority. All summed up I long for the most accurate (in the broadest word’s meaning) listening result my money can buy. And that – today, and on equal other conditions – still exclusively calls for ol’ wired connections.

Fiio primarily markets it as a BT device, no doubt about it, but they also don’t add any strings, warnings or disclaimers about its USB features. Nothing on Fiio’s own product presentation warns me like “hey, we made this for Bluetooth ok? yes you can also use it a bit with USB but don’t ask for miracles there !”. Nothing in that region.

Let’s read once again Fiio’s website. Ha! There is indeed a disclaimer: “* The Equalizer does not work for the LDAC codec”.

But that’s for BT, which I couldn’t care less about. No warnings about USB. I’m a happy camper. Not really as cheap as I dreamt but hey… so I order it.

BTR5 audio quality is indeed outstanding. Especially on the Balanced output side. Check the review sites I mention at the bottom of this post, I concur on their findings about Sound Quality.

Compared to my ol’ faithful X3 mk-III I hear a significantly airier sound, a host more details and a wider soundstage. In addition to much higher output power of course. Simply put: sound is much better.

As I hoped, BTR5 can be used as a USB dac – and as such it indeed offers a better sound quality compared to BT connectivity. As I expected.

So after a few days enjoying BTR5’s really delicious sound quality I go ahead exploring some of its other functions.

A 10-band graphical Equalizer is built-into BTR5. It’s not mentioned anywhere but my suspect is ES9218P’s internal eq being exploited. Which would be great.

Sw support is quite basic. 10 fixed bands. Each slider adjustable in 0.1 dB increments (this is very nice) but no preamp attenuation possible, and only 1 custom profile can be set and remembered.

Ok, let’s see how it works.

Sound is not affected by the Equalizer settings. Can’t possibly succeed there.

After a couple of hours trying in all shapes and forms I dig into Fiio’s support forums. Here’s what I read :

“the EQ of BTR5 is not supported in USB DAC or LDAC mode currently.”

A user politely complains about BTR5 effectively not having EQ for what he needed and Fiio’s representative says:

“We also have many other devices support USB DAC, but EQ does not work in this usage.”

which is such dumb an answer to be a real insult.

A user insists and asks when Fiio thinks they are going to fix this, and they answer:

“It is not a issue to be fixed. Since the audio processing process of LDAC [bla bla] it will take a certain amount of time. And we did not mention the EQ will support in USB DAC mode.“

In the end, after someone mentioning that – unlike them – Radsone is perfectly capable of making EQ work everywhere, they sounded a bit more collaborative (picked in their pride maybe?) and timidly advanced a possibility about LDAC support “around september” (but no clues about USB yet).

You can read it all from this link, it’s so tragic as to become comical.

The technical part of the issue is annoying. Not more than that really. An equalizer built into the DAC chip hints about a much better precision and performance than one operated at the preamp or at the source stage. I can sure live without built-in EQ on the BTR5. I paid for that, I expected that, and I’m disappointed for not having it delivered, but I’m alive without and I will hopefully stay so.

The industrial part of the issue is by and large unacceptable, indeed irreceivable.

No vendor can afford disregarding its own product specifications like that. Moreover, while everyone makes mistakes of course, a manufacturer should never try to hide behind a skinny finger like Fiio ridiculously enough is doing about this issue. “We did not mention … it will support ??“. Are they kidding or what? Well I am not, and the bad news is they are not either, apparently.

On a broader perspective, BTR5’s sw is crystal-clearly and unterminated project (more details on this below, give me some rope here):

Will I share these issues with them. No, they lost me. For good.

I am lucky enough to be able to disregard BTR5’s cost financially, and I can consider myself twice lucky, in a sense: it took me just 100 not well spent Euros to find out I need to cancel Fiio as a potential future supplier for more commitful products.

Besides my disappointment regarding USB/EQ and Fiio’s realiability as a vendor, I must also mention a few other things that really don’t work as intended on BTR5.

User experience leaves much more to be desired. Usage is not intuitive and not well documented (or even totally undocumented).

Most of BTR5’s configurable parameters are only accessible via a mobile App. So even when using BTR5 as a USB DAC connected somewhere else, a phone + the Fiio app is anyhow needed as a remote control panel to access some of its settings.

No Windows version of the App is available.

Oddly enough, some other BTR5 settings are viceversa accessible only via the physical buttons, namely

This notably means that when connected to a smartphone as a USB DAC and (for the purpose of the Fiio app) via BT too, BTR5 cannot be possibly used to take calls.

I recommend unticking the Voice Calls option under the phone’s BT panel inside the paired BTR5 device icon due to this – then again, when a call comes while you are listening to music you must take your IEMs off and answer from the phone’s shell.

Android MIC support for calls only

(Only) when BT-connected to an Android Phone BTR5 allows for dual MIC support options: if the IEM plugged onto BTR5 has a MIC on its cable, it is being supported; if not, the MIC which is built into BTR5’s chassis is used instead, and it will offer more than decent noise cancelling too. Good.

But… both IEM’s MIC (if present) and BTR5’s MICs are not passed on to Android for any other functions other than voice calls. You can’t take vocal notes if your IEM is connected to BTR5 – to name one – and this is a system-level limitation, so you won’t get that no matter what App you try.

When connected as a USB DAC to “some” hosts (e.g. non-recent Android boxes, or a Windows 10 PC) BTR5 does not switch sampling rate setting following variations on input file features.

In practice: if after playing a 16bit/44.1KHz file a 24bit/96KHz file is played BTR5 stays stuck on 44.1KHz mode resulting in totally distorted sound.

The cause of the problem is some non-standard crap inside BTR5’s and/or the host USB firmware. Fiio has been knowing the problem for a while now and by judging on what is published on their forums they seem unable to support it.

Solutions and workarounds I could find:

I conducted a number of tests in the following conditions:

Battery autonomy when running via Bluetooth is more than twice as much, and that’s already not great. This simply sucks.

BTR5 is very small for what it is and especially for its power, and quite lightweight (44g). But not enough for my purpose.

When used as a USB DAC it does “add a significant something” to the source, be it a smartphone or a transport like Tempotec V1.

I can’t possibly plug it and treat it as a fat dongle really. It’s not. It’s indeed a small but not insignificant box.

Even if 3 to 5 times smaller than the typical portable USB DAC device – usually the size and weight of a fat smarphone – it still requires some strapping to the source it connects to. Rubber bands, velcro, whatever. This for the dual aim of not having “too long a serpent” to manage (phone + USB cable + BTR5 + IEM cable) and of preserving the phone’s USB connector, especially if like in my case it still is a relatively delicate micro USB port.

So after an initial very intense love affair, I’ve phased BTR5 out and replaced it (for now) with lower-SQ, super-cheap, DAC-dongles: barely thicker than a IEM cable connector and just 5 grams in weight. More on these on other posts.

A collection of useful links