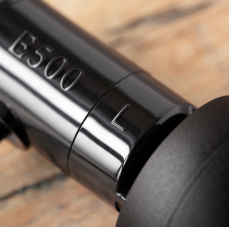 Released not long ago, cheap, apparently difficult to “interpretate”. This is probably the reason why E500 got quite little attention by the reviewers yet. Those I could find are in the usual links here at the bottom.

My own analysis here if you really care

Looking at their extremely low price, a few bought a pair maybe just only to get a full set of E-series eartips, arguably amongst the very best silicone eartips applicable to any IEM today, hoping to have “a free spare IEM” with them. I honestly was amongst them. In my case I added an extra nuance like “well let’s see what final people invented again”.

And they did invent something, indeed. E500 is actually a quite unique product inasmuch as merging 3 fundamental values:

Knowing nothing about binaural-what?? when I got them I of course started with the “trivial” application: listen to “normal music”. And well, I found something very similar to E1000 to be honest. Not identical though. A fr-graph comparison is very helpful here to support my notes:

Those +2dB on the bottom end are very audible and render E1000’s dry sub-bass a perceivable bit “meatier”. I would still call them neutral-ish, but with an accent here.

High mids and especially trebles is where the bigger difference is. A slight less presence in the high-mids and especially a way smoother treble path takes E1000’s tendance to sibilance totally away, and its bright-ish accent too. As a consequence, E500 sounds overall way more relaxed, not bright, not even “clear”, tamed, although of course far from being dark.

One other important difference is sentivity. At the same 16 Ohm impedance as E1000 E500 only ouputs 98dB @ 1mW instead of 102. And this is way evident while using it. Plugged on my Samsung S6 set at 100% volume E500 produces loud-ish pressure but still somewhat muddy sound. It takes more power (e.g. Meizu’s HDP) to make it really enjoyable.

Soundstage is very similar to E1000. Imaging… depends! On some tracks it’s ok, on others how can I call that… “insecure”? Detail retrieval is a bit less than E1000, although it appears to be al lot less if not enough amping is applied to compensate for lower sensitivity.

So, summarising: if E1000 is neutral-slightbright, E500 can be probably be called neutral-relaxed. It’s very enjoyable per se, and it becomes a shining start as soon as you remember it costs less than €20.

For a good intro to the topic, wikipedia is as always a good friend.

I’ll try to explain here the key concepts (at least those I understood myself).

Think about how music recording and playback happens “normally”: a few microphones are places in front / around the players / singers. This is of course to “better catch” each instrument / voice sound. Each microphone records his own “track”.

Later all such tracks are mixed together and integrated in a single stream with just 2 channels (so called “stereo sound”). The listener, in facts, is presumed to be a human being – having only 2 ears, not one per each microphone that was originally used. The purpose of the game is therefore recombining (mixing) all acquired tracks into a single comprehensive “musical stream” that is as similar as possible to what the listener would have heard if he was “there” in the case of a live performance, or to what the emotion the players originally wanted to transmit in the case of an assembled track.

Such channels are then played back by 2 loudspeakers placed in a room, one per channel, with the listener sitting front-center to the the speakers, one being displaced a bit on his/her left the other on the right.

All clear till now? Good.

In reality the situation is a tad more complicated but I’m cutting it short now.

Even in this simplified form, think about it: in order to deliver to the listener’s ears a sound as similar as possible to the one he would have heard “being there”, the process actually involves taking many small sound “parts”, sourced as close to the each originating element (instrument or singer) as possible, and then combine them cleverly to artificially reproduce the interactions they have while originally listened to “together”.

Problem: there are technonological limitations to our “combining cleverness”. We simply cannot, or cannot easily / economically enough, rebuild the “entire” comprehensive, integral spatial sensations the user has while “being there to listen”.

What about changing the approach altogether. What about – instead of using many microphones, one per sound source – we using just 2 microphones, 1 per target-listener ear. And while we are at it, what about we putting these microphones actually into a dummy listener head, positioned “on stage” while the original music is being played.

“Cool ! so from now on, or anyway soon in the near future, I look forward into all music recorded like that, as it will be much more realistic. Too bad for the past, I would love to hear like… the Beatles in 3D 😀 “

It’s actually even better than that. When no originally-binaural recording is available, advanced demixing/remixing techniques have been developed that allow for “converting” an existing stereo master into a (let’s call it) “binaural-friendly” version. The accuracy is not exactly the same but it’s brilliant anyway.

Aright, you got the concept. If you want to start your way into knowing more pull a mug of coffe and follow the wikipedia link, or just google around.

Of course we are. Read on.

I’m again using a rough simplification: “binaural” tracks (both binaural-recorded and “simply” binaural-remixed ones) contain “3D cues”, sort of unhearable “hints” telling the drivers (the little speakers inside the headphones) how to “behave” to deliver the maximum 3D fidelity to the listener’s ears.

Yes, E500 is the first IEM by final incorporating the ability to actionate upon 3D cues and reproduce binaural-recorded/mixed tracks in an incredibly realistical way.

From this point of view, it’s quite surprising that – as noted above – E500 is also a good IEM for “normal music”. Still, as final themselves declare, E500 is conceived as a specialty device, fully focused on binaural sound.

It’s quite easy to make a test : if I listen to the following binaural-recorded sample with E1000 or E500 the difference is totally evident.

Listening with E1000 (or any other IEM granting ample soundstage reproduction) the 3-dimensionality is very evident. Imaging is good, and corresponds very well to what I can see on the video. Then I put E500 on, and I enter a further level: imaging is much more precise and resolved !

E500 is an unbelieavable entry-level opportunity to put my nose ears into binaural, 3D sound at the cost of 2 pizzas.

Besides all that, it still remains a great neutral-signature IEM, with a sub-chinese price coupled with outstanding sound performances, provided enough juice is supplied by the source.