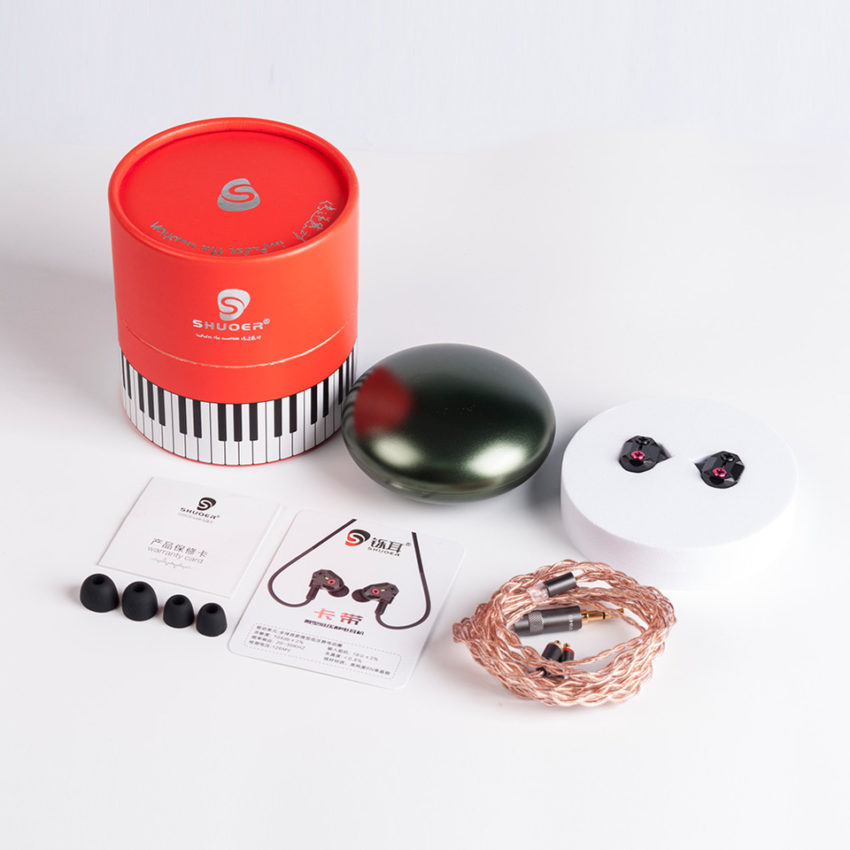 One of my passions is cool jazz, bebop, postbop. What I long for in an IEM when listening to that genre is

Let me use the scheme down here as a graphical guide into what I was looking for, using TIN T4 as an example of where I wanted to improve.

T4’s midbass is just OK for my taste, maybe sllllightly too full but that’s ok. Where it starts getting not good is the dramatic flattening from 100Hz downwards.

Elevation apart, I like contrabass being fast and punchy “BA-style”, but I grew into likeing it to have some “body” too – for which a DD is better of course but only paired with a good sound engineer to tune it such as not boom nor rumbe the way rock tracks commonly require.

An example of sub-bass extended & elevated the way I like can be found in final’s E5000, although that model sadly doesnt match my tastes on bebop on a few other accounts.

On the opposite end, T4’s highs and trebles look like an unfinished job to me both in terms of FR (their infamous 5K peak) and of technicalities (which are not pictured there ofc). They are shouty at times, not shrilling really (at least that) but not significanly detailed on the other hand.

Finally, even if not a “vocal-centric” IEM, T4 is north of decent, actually almost good on mid frequencies and vocals. I might even accept something less than that in exchange for better xlows and trebles.

I got ’em Tapes 2nd hand, for 2 reasons: one is obviously lower cost the other is a reasonably paypal-backed assurance that this sample, being already burnt in by a previous user, is not affected by the frequent QC issues reported by many on this model. Oh by the way: look at the bottom here for the usual links to key review sites including rants about QC issues.

So I got Tape in and started listening.

Shouer Tape it is.

My own technical analysis here if you really care

Bass and sub-bass are just glorious. Fast, tight, punchy, strong. A laser. Wouldn’t change a bit there, I mean it. Tape’s bass is for this specific purpose (cool jazz) even more ideal then my beloved E5000, ’nuff said.

If I reeeeeally want to build a downside that’s scarse musicality: it’s all very technical, sharp, almost “cold”. Which is perfect for cool jazz. Put a pop or soft rock track up and that’s much less so.

Mids are just OK. Recessed but present nonetheless. Lower mids are also relatively incospicuous, female are better but on some notes they are made thin by the highmids and very thin by some trebles (see below).

In short: female voices are more than decent most of the times, male voices are just average, sometimes even a bit “meh” – which is normal, considering how lowmids and midbass are “dried-out” on the Tape.

High mids & trebles: Apart from my special x-bass fondness, the treble section is no doubt “the” reason for the season Tape. Great level, speed, crispyness, sparkle, detail, without a reason to call the ensemble “bright” indeed. Great.

Of course serious treble resolution and detail instantly reveal how crappy some tracks are in terms of recording and/or mastering quality. Tape is a heartless killer in that.

So far so great.

Now up for the problems.

1 – Some upper frequencies appear to “pollute” the overall sound making it un-natural, at times even “ridiculous”.

This is crystal-evident. And unlike T4’s shoutyness, this is not a frequency-delimited problem. The bad with T4 is that “some notes”, “some times” are shouty but that’s it. The problem with Tape is that depending on which frequency treble details are present on the band’s instruments (or on the master), the entire song gets a sort of “un-natural halo”. A – true – shit.

I ran a research on this issue and according to the usual suspects experts the culprit is identified in Tape’s 3.4K “hump”. EQing it down, always according to them, works a treat. Hope so.

2 – Some very high frequency tones produce a superthin, metallic, piercing “zing”. Nothing to do with the quite common high-mid sssibilance (from which Tape is almost immune) – this got a way higher pitch.

“Aright – I thought – this is the very day I get my hands dirty with EQ-ing“.

Equalising down & amping up.

First thing has been looking into Jaakko Pasanen‘s work, not much in his capacity as developer of AutoEq as a sw, but as a collector of hundreds of IEM / EB / HP compensation curves, mainly targeting Harman but not only, developed on the basis of measurements taken (and published) by Crinacle, Rtings, Oratory1990, Innerfidelity, etc etc.

Of course I was not apriori keen on EQ-ing Tape all the way into the perfect Harman target, rather into taking inspiration from what I was to find there.

Under link #2 above I could find two pre-cooked templates and their rationals about Tape:

Simply put: Oratory1990’s variant is a leaner bass, and also a less emphasized 3K hunch when compared to Harman. Fine, but what intrigued me 100% was that Oratory1990’s target curve is quite exactly following Tape’s OOB FR curve from zero until the mids.

So I just gave this one a go first.

Result: too much on the other side. Even when appropriately amped (more on this below) trebles tend to be over-tamed. Dampened even.

The other target, Harman’s, proposes a “livelier” high section (together with a different rendition from the middles down):

So I mixed and matched: I took the this second Harman-target preset, but I only applied it from 900Hz up.

The “usual experts” were kinda right in saying that what I earlier called “the polluting trebles issue” is the consequence of the 3.5-4 KHz hump on Tape’s curve. Tame it down by 3 dB and that goes for good.

Yet, the second issue (the high-pitched “zing”) is still there. And that’s logical after all, as the highest frequency correction included in the above-linked preset is on 6.5K, and that pitch is clearly higher.

After a bit more digging I found a more extended version of Oratory1990’s scheme, in short proposing to bump 16K down by -5.4dB and 8K up probably to compensate by 4.9dB.

Optionally, by enabling/disabling/reducing Harman-scheme values relative to 900/2050Hz vocals get fuller too (but this changes some guitars too, so it’s a tradeoff to evaluate case by case). This, without any sensible payback in terms of sparkleness, detail, resolution, imaging etc.

In short: a true fix. With one cost: amping !

Applying EQ-ing by definition implies (amongst the other things) that the resulting sound amplitude might clip-out i.e. distort. To avoid that, a negative gain correction / compensation is supposed to be applied at the pre-amp stage. Which, in its turn, avoids clipouts but (trivially said) “makes it all less loud” – which finally has two consequences:

Shuoer Tape is not an overly hungry IEM (18 Ohm, 104 dB) per se, but the EQ correction above requires a pre-amping offset of at least -5 dB !

A important foreword is in order prior to telling what else happened.

In the everlasting querelle about earphone cables having or not having an impact on sound quality, I find myself in a sort of intermediary position. I happen to have swapped cables to all of my replaceable-cables IEMs not pursuing the sound signature variation allegedly offered by them, but much more simply because all the IEMs I ever got – with the sole exception of these Shuoer Tapes – came with single-ended cables, and I needed to replace them to exploit my the balance-ended ports on my sources, offering much more power, lower noise and a tad more dynamics.

Have I ever noticed any impact of this ore that cable on sound quality? Frankly: I don’t really know. I mean, if you ask me I can answer a certain cable seems to ever so slightly have warmend that IEM’s sound up, but then again I’m unable to tell exactly by how much, and to honestly confirm if this was not just only an impression. I do not have an infrastructure allowing me to conduct a really short-term A/B test (less than 1 sec or so), and we all know that sound memory can be really fallacious. For sure, if (and I underline if) a difference is there, that is really, really a nuance.

So much for the foreword.

As I mentioned before, Tape came with 2 cables, both Balance terminated: one carrying the “original” Shuoer brand, the other under the Yinyoo brand. Both based on Single Crystal Copper conductors, although with a different scheme and density.

For whatever reason – I really don’t remember why – I started my experience with Tape using the silver-color Yinyoo-4core 7N SCC Single Crystal Copper cable. Neither – given the foreword above – I had ever felt a true curiosity regarding how the Tape-branded alternative cable would “sound”.

Yet, the two cables do have a quite macroscopical external difference: the Yinyoo one, featuring a plasticky sheath, is thicker, sturdier, way less flexible. The Shuoer has an infinitely leaner (and more elegant) sheath, and it’s perfectly flexible.

Long story short: as I mentioned way above, Tape’s have an annoying tendency not to “stay in place” once fitted into my concha – and Yinyoo cable’s relative rigidity most certainly is not a help there. So one day I decide to swap them and I put the much more mechanical-friendly Tape branded one in.

Well, you are of course allowed not to believe this, but it’s true: using the Tape branded the 16KHz zing gets reduced like 90%, both in frequency, i.e. the number of times I can hear it happening, and in quantity, when it does happen. No perceivable impact on the sibilance instead.

I know, it’s a huge pill to push down. But that’s it. There surely has to be some measurable element causing this, e.g. the two cables have significant impedance differences? Or something like that. Too bad that I don’t have sensible enough electrical instruments to even start trying taking some measures. Whatever, the fact stands: with the Tape branded cable I can afford a much “lighter” EQ-ing impact, if at all…!

For the sake of completeness, of course I’ve been burnt by the curiosity and I effing rotated all my cables under Shuoer Tape. Result: just 2 cables “tickle” the zing in the trebles; all the others behave like the Shuoer branded one. And, those 2 having this negative impact on the Tape do not show any similar negative pairing on any other IEM model I have…

Tapes are damn good. Hopefully they will not break down on me (referring to their “erratical” quality according to many).

They still have imperfections, the most important of which is their sheer verticality. For as much as I love them for the exact purpose for which I bought them, I would never ever use them for genres calling for mellower emotions.

Another limitation is their moderate power hunger following EQ settings.

Still, until something even better will come in within my budget, these are 100% my goto drivers for bebop. Tin T4’s can go.